Dear user, the EURAXESS portal has been renewed to offer you a better and more secure experience. You might encounter minor inconveniences as we are concluding the upgrade and migration to a new content management system.
Description

After you retire, your pension will probably come from several different places. If you have worked and lived in Sweden, you will get a national public pension based on the income you paid tax on. You might also have an occupational pension and a private pension scheme.

The Pension Pyramid illustrates the various sources of pensions in Sweden. 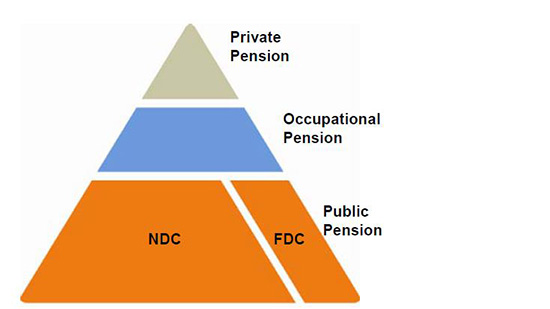 The base is formed by the national retirement pension paid by the Swedish Pensions Agency. Most employees also receive a collectively bargained occupational pension from their employer and if you have worked for the State, you will receive a state occupational pension. Some people also have a private savings scheme. The pensions add up to form your total pension.

You must apply for the Swedish old age pension by yourself and you should apply in good time.

What is the orange envelope?